This week the UEA drama students did 2 workshops with us. We played lots of fun confidence building games and made some funny sketches where we had to translate someones made up language. We also created our own short miming scripts about our mornings. 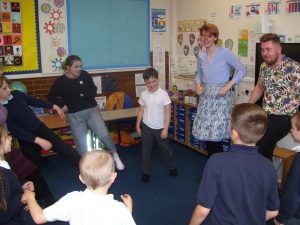 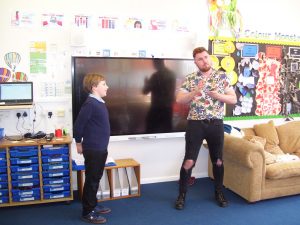 We used natural materials to dye our fabric for the next section of our applique. We found leaves and flowers and placed them under the material. We bashed them with a stick and then used a roller to squeeze out all of the colour. 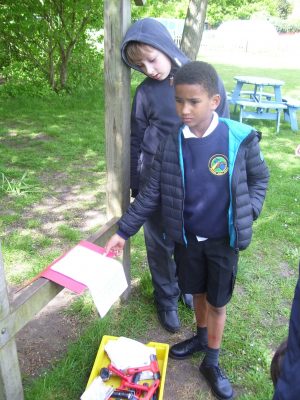 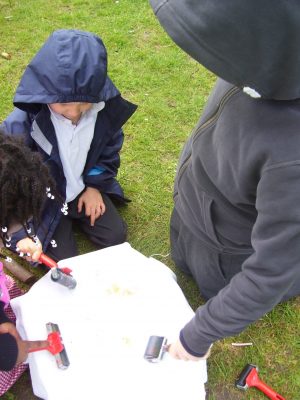 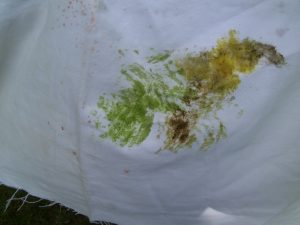 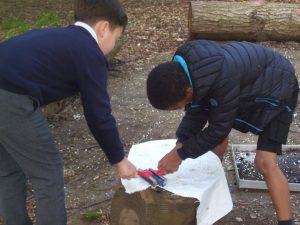 We continue to finish our project on Norwich through history. This week we have looked at how the Normans built the city and it’s defenses. We looked at old maps of Norwich which show the wall and we compared with the modern map. We found that many of the places in Norwich still exist today. We also used google maps to follow the wall around the city and have a look at the parts of it that are still standing today.  We have begun to plan our 3D model of the city ready to begin building the walls next week. 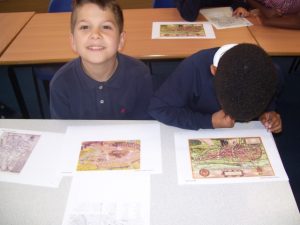 We also looked at Castle design and looked for the weaknesses in the castle to plan an attack. We presented our plans of attack to the rest of the class. 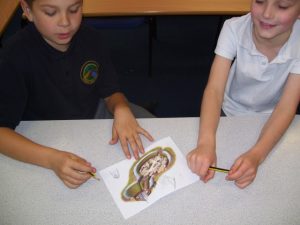 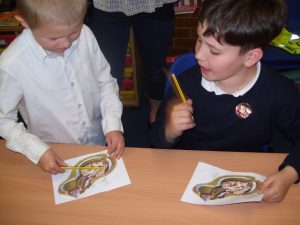 LE: Today we did plans of how we would attack and defend a Norman Motte and Bailey castle. We had a bunch of allies and we all thought of different ways to get in. The defenders on the other hand are doomed because they are going to come in and kill them all.

NK: We drew a plan of how to build the Norman castle and wall in Norwich.

MH: Different people planned how we were going to attack and defend the castle. THere were many plans and we worked in pairs. We also worked on making a 3D model of the castle. We played sleeping lions, I was the 3rd one left out of 2 and 1.

On Wednesday, we were creating ideas for the Lord Mayors Procession. LE and I went to a meeting to share ideas.

DV: We got some leaves and flowers and smashed them up. We used a roller to make a pattern on the material.

JP: We played a few games with the UEA drama students. We played a different language game, someone made up a language like “blahs slubas blah blah blub” Someone was a translator and had to make up what the other person had said.

JB: My favourite thing this week was when we were drawing our plans of how to get into the castle.

ZW: I found it funny when I mimed taking my dog for a walk.

JE: We drew a model on cardboard of the Norman castle and we drew the river, bridges and the wall.