This week we have played a Maths game from Somalia. It was similar to draughts but it was called ‘Pumpkin Patch’. We played against each other and tried to think strategically. Today, we continued to work together finding patterns within shapes. We used our mathematical vocabulary to explain the patterns we found.

Welcome back to everyone. It has been great to catch up with you all after the summer break and to start getting to know the new Year 3s!

Today we started a week working as mathematicians and philosophers.  Can maths predict the future? This was the question posed by Dr Alison Borthwick, visiting maths educator.  She led our launch assembly with Hannah Howard and Alix Lewis, taking us through some genuinely astounding maths scenarios that left us all agog!  Children then returned to class to start a week long series of investigations. In the afternoons we’ll start exploring some big themes through our philosophy curriculum.  There will be a showcase of the maths investigations next Wednesday before we start our work as scientists.

Today at Wensum is Empty Classroom day.  We embraced this in Year 5 by doing our maths learning in the tree circle and on the field.

We had a great time and did some fantastic learning.

On Tuesday, Year 3 and Year 6 teamed up to solve the Maths NRICH problem- I am eight. As Year 6 had already had a go at the problem, they used their knowledge to help the Year 3s to come up with as many ways for themselves, using a number of resources to help them.

Over the past couple of days Year 6 have been applying their strategies for solving different arithmetic questions. We have also been reasoning why we have used certain methods. 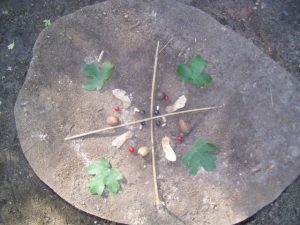 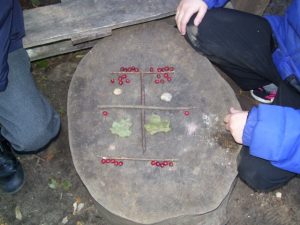 In maths we looked at symmetry and made symmetrical patterns using nature.

World Maths Day 2018
The children had a fun-filled day today, taking part in a variety of maths activities including competing with children around the world on Mathletics! All children have a log in to Mathletics and can access it at home.  Thank you to staff and children for all their efforts today; the costumes were so creative and the atmosphere around the school was magnificent!

Wonderful maths work today.  Students from The Norwich School were in to work with Year 4, playing maths games with them to boost fluency.  Year 5 were continuing their work on angles and Year 3 were exploring strategies for subtracting small numbers from larger numbers.  Great to see such engagement and enjoyment in maths.  A big thanks to the Norwich School for their on-going work with us.  Enjoy the gallery.

On Tuesday, Year 4 worked collaboratively at solving an NRICH problem titled ‘Fractions in a Box’. This was quite a tricky task and can be found here.

Here are some of their solutions:

What we found out:

It doesn’t matter what type of triangle it is, all the angles will add up to 180 degrees – Izzy W

I thought (quadrilaterals) would add up to 360 degrees because a square does and different quadrilaterals are just a stretching square – Aimee.

Next Page »
We use cookies on our website to give you the most relevant experience by remembering your preferences and repeat visits. By clicking “Accept”, you consent to the use of ALL the cookies.
Cookie settingsACCEPT
Manage consent

This website uses cookies to improve your experience while you navigate through the website. Out of these, the cookies that are categorized as necessary are stored on your browser as they are essential for the working of basic functionalities of the website. We also use third-party cookies that help us analyze and understand how you use this website. These cookies will be stored in your browser only with your consent. You also have the option to opt-out of these cookies. But opting out of some of these cookies may affect your browsing experience.
Necessary Always Enabled

Performance cookies are used to understand and analyze the key performance indexes of the website which helps in delivering a better user experience for the visitors.

Analytical cookies are used to understand how visitors interact with the website. These cookies help provide information on metrics the number of visitors, bounce rate, traffic source, etc.

Advertisement cookies are used to provide visitors with relevant ads and marketing campaigns. These cookies track visitors across websites and collect information to provide customized ads.

Other uncategorized cookies are those that are being analyzed and have not been classified into a category as yet.