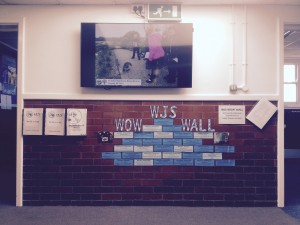 Many of our children are busy people outside of school hours. They sing, dance, run, skate, swim and cycle.  Some take part in martial arts while others are regular and valued members of sports teams around the city.   Many more play musical instruments while others act.  We think that it is vital that as a school community we recognise and celebrate these achievements together as it provides a much more rounded picture of a child’s capabilities, achievements, passions and interests.  Since February we have been presenting WOW! Wall bricks to children who have been nominated for their many and various achievements by their families.  The presentation is part of our well established Friday Celebration Assembly.  If you would like your child’s achievement to be recognised in school all you have to do is complete one of the nomination forms below and return to the school office. The nomination will be processed by Zowie Glenn who turns the nomination into a laminated ‘brick’ which is then displayed in reception for all to see.